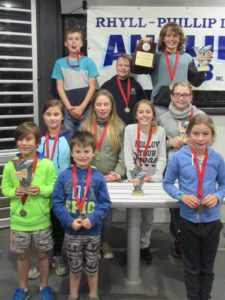 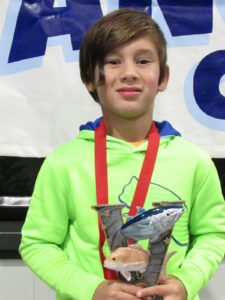 International Star Wars Day welcomed the commencement of the final 2018/2019 Rhyll Phillip Island Angling Club fishing competition held on the 4th and 5th of May. “May the Fourth be with you” was certainly a statement concerning the weather, providing ample wind and rain. Despite rumours of large snapper and an abundance of whiting, the conditions were not as conducive for angling, barely a handful of fish were weighed-in on Saturday. Like a fairy tale, the story changed on Sunday when calmer waters provided better opportunities, and, angling enthusiasts were rewarded. Indeed, the rewards were plentiful and there were many reasons for celebration at the clubroom afterwards. The traditional presentation for the weekend’s competition was followed by the announcements of 2019 Squidgie and Junior club champions. The event was expertly catered, where dedicated volunteers and the club provided an excellent spit roast to warm members comprising participants, friends, family and visitors.
Anglers presented eligible species, including 41 fish and 1 shark, to the weigh-in masters and King George whiting appeared to be the dominant species. Kate McCausland was clearly aligned with the force, presenting 5 species worth 80 points to win the Squidgie Mixed Bag Points competition. Denver Firth and Madison Memery continued to demonstrate their skills, presenting 3 fish (50 points) and 2 fish (35 points), respectively. The force continued to be strong for junior enthusiasts, with George McCausland the victor of the Junior Weight competition, weighing-in a King George whiting of 335 grams. Isabella Bland continued to impress and was triumphant, winning the Junior Points competition with a 360-gram King George whiting worth 1008 points.
Gerry Gibb wrestled the biggest fish of the weekend, a feisty Salmon weighing 1,105 grams, to win the Senior Heaviest Weight Competition. Heidi McCausland coaxed a King George whiting from the water, also winning the Senior Heaviest Weight competition with a 330-gram specimen. The Senior Points competition seemed like deja vu with Chris Leonardos and Debra Orr each presenting King George whiting to the weigh-in masters worth 1526 points (545 grams) and 1036 points (370 grams), respectively. Not wishing to be left out, Daniel McCausland battled with an adversary to win the Senior Shark competition, his Gummy Shark weighed 3,915 grams. The force was particularly strong for Norman Trickey, using Jedi mind tricks on a King George whiting, to win the Secret Weight competition with a respectable 415 gram specimen (secret weight 463 grams).
The Squidgie and Junior competitions were well represented in the 2018/2019 season, and the enthusiasm continues to grow. Without doubt many friendships have formed and strengthened through an alignment of interests. Daniel McCausland, club president, presented participation medals to all youngsters in the prelude to the announcement of their club champions. The ceremony received thunderous applause as trophies were presented. The runner-up of the 2019 Squidgie competition is Jacob Memery and the Squidgie Champion is Denver Firth. The runner-up of the 2019 Junior competition is Isabella Bland and the Junior Champion is Heath Womersley.
Announcement of the Senior awards will occur on the 25th of May, 2019 at the Senior presentation night. For further information about the club and competitions please visit the website: www.rpiac.com

No Replies to "May 4-5th Competition"