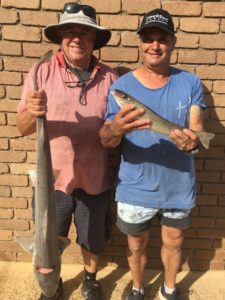 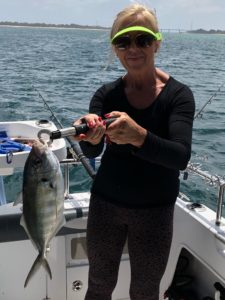 January 12-13th, 2019
Warm and windy conditions presented challenges to competitors in the 6th 2018/2019 Rhyll Phillip Island Angling Club fishing competition, held over the 12th/13th of January. Being the first competition of the new year, it is not surprising that the big fish ignored the memo and elected to stay on holiday. Nevertheless, a total of 51 fish and 1 shark were weighed in and the variety of eligible species included snapper, whiting, trevally, mackerel and flathead. As the water temperature in Western Port increased, strategies were altered, hot spots were abandoned, crystal balls were consulted and examining tea leaves was contemplated. In fact, enthusiasts at the post competition presentation at the Clubroom shared their secrets of success and stories of the one that got away. Overall, another fantastic event enjoyed by the Phillip Island community, members, friends, family and holiday makers.
A burst of participation from the youngsters saw them out fish many of the seniors. The Squidgie Mixed Bag Points competition was won by Maya Womersley, weighing in 2 fish totalling 35 points, only 25 grams ahead of the runner up, Hannah Cuffe, also weighing in 2 fish for 35 points. Congratulations are also deserved by Denver Firth, 1 fish/15 points, Jacob Memery, 1 fish/15 points and Cooper Izzard with 1 fish/15 points.
Heath Womersley worked hard all weekend and weighed in a 655g Trevally to win the Junior Weight competition. Similarly, Isabella Bland presented a King George Whiting worth 1,246 points (445 grams), confirming persistence is the secret to success, winning the Junior Points competition.
The Senior Heaviest Weight Competition was won by Sam Orr, with a Snapper weighing 1,170 grams, and Anne Marie Richards with a Flathead weighing 335 grams. The Senior Points Competition was won by Peter Cubeta, succeeding on the slack tide with a King George Whiting worth 1,680 points (600 grams). Anne Marie Richards returned to the podium, also winning the Senior Points Competition, and was rewarded for a Trevally worth 1,281 points (915 grams). Chris Leonardos clearly had a taste for flake, winning the Senior Shark Competition with a Gummy Shark weighing 4,345 grams. The Secret Weight Competition was won by Steve Bland, weighing in a Whiting of 210 grams (secret weight 213 grams).
The next competition will be held over the weekend of 2nd/3rd February 2019. For further information about the club and competitions please visit the website: www.rpiac.com