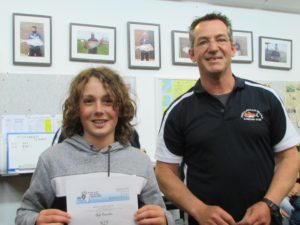 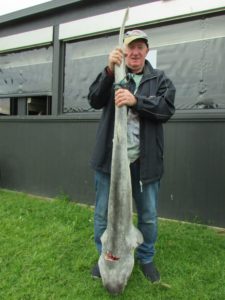 Wondering whether the weather will worsen or weaken when woken was the sentiment for the third Rhyll-Phillip Island Angling Club (RPIAC) fishing competition for the 2019/2020 season. The event was held on the 9th and 10th of November and the weather forecast threatened with westerly winds up to 40 knots and rain. The proposed interclub Snapper competition including Wonthaggi, Warragul and RPIAC, coinciding with this event, was cancelled due to the predicted conditions. Fortunately, the weather was better than predicted, with Saturday providing wind from 10 to 15 knots, frequent gusts and about 5 mm of rain. Sunday was twice as good, having half the wind speed and about 3 mm of rain. Surely, the adage “wind from the west, fish bite the best” was the trusted motivation for angler’s who decided to test the conditions and try to catch a fish.
A total of 34 fish and 2 sharks were presented to weigh-in masters Sam Orr and Norm Trickey over the two days and, despite the weather, there were numerous fishing tales to be told. Like clockwork, at the conclusion of weigh-in, the weather settled and anglers looked out of the clubrooms to the water. Some groaned whilst others spoke about fishing on Monday with renewed enthusiasm. The presentation of awards and post competition barbecue was well attended and expertly catered, providing the ideal opportunity for members, friends and family to finish the weekend.
Despite recent reports of huge Snapper entering the bay, the $5,000 incentives for members with extraordinary catches remains banked until the Club’s next competition. The five eligible species nominated for a first-to-catch $1,000 prize, equal to or exceeding the nominated weight, are: King George Whiting (1,000 grams), Snapper (10.0 kilograms), Gummy Shark (20.0 kilograms), Mulloway (25.0 kilograms) and Kingfish (25.0 kilograms).
Clearly the weather dampened some enthusiasm and restricted opportunities. Accordingly, the Squidgie Mixed Bag competition was uncontested. With an hour left before the conclusion of weigh-in, Junior Club Champion, Heath Womersley tried his luck from the jetty. After a brief battle, Heath coaxed a 485-gram leather jacket out of the water to win the Junior Weight competition.
The Senior Heaviest Weight contests were won by Chris Leonardos, for a respectable snapper weighing 5,195 grams, and Jill Trickey, for a smash-and-grab Barracouta of 1,685 grams. The Senior Points competitions were won by Peter Cubeta and Jill Trickey, both presenting Trevally to the weigh-in masters, worth 1,260 points (900 grams) and 938 points (670 grams), respectively. Malcolm Reid learned a valuable lesson in manicuring after catching a hungry 7-Gill shark that weighed 13,900 grams after cleaning. It appears that the shark took a liking to Mal and wanted more than just a fingernail. Luckily, a bandaid, a cold beverage and the award for the Senior Shark competition were enough to keep him happy. Pat Gleason was triumphant in the Secret Weight competition after weighing-in a King George of 415 grams (secret weight 423 grams).
The next competition will be held over the weekend of the 23rd / 24th of November 2019 where angling members will compete for the Bill Wallis trophy. For further information about the club, competitions and rules, please visit the website: www.rpiac.com